Boat fittings and proud of it

Huge range of A4/316 marine stainless boat fixtures
and fittings, all fully-dimensioned for your selection

How To Wire A Manual Bilge Pump With A Float Switch 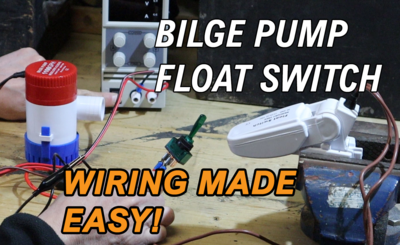 In the wiring installation of the 12V bilge pump the key elements are the 12V supply, a suitable fuse for protection, the float switch (which will be installed in the bilge), and a separate switch (installed inside the boat or cockpit) to turn on and off the electrics to the bilge pump system.

A simple electric bilge pump comes with two wires, a positive and a negative wire.  The impeller of the bilge pump is designed to turn in a specific direction, therefore it is important that the positive and negative bilge pump wires are connected the correct way round to their power supply.  Any bilge pump should be protected by a suitable fuse, typically in the range 5Amps to 15Amps, but check with the instructions for your particular pump.  In this guide we show you how to wire a 1100 gallons per hour bilge pump with a bilge pump float switch.

If you found this guide useful or interesting you might like to sign up to our newsletter, so that we can let you know when our next guide has been published.